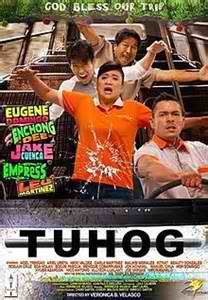 In Filipino, the word tuhog means to fasten in a skewer. However, in fiction, it means to put and connect things to form a complete whole.

One made by Jeffrey Jeturian and stars Ina Raymundo. I had the chance to see this film on a special advanced screening back in 2000 at the UP Film Center.

The other one stars Eugene Domingo which I haven’t seen yet but I will someday… soon. As what I’ve seen in the latter’s trailer, it is about three different and separate stories that are connected in an accident. It follows three different stories running parallel to each other in one single movie.

I remember writing my first screenplay, Sa Likod ng Puting Uniporme. The original concept has three different stories that would run in three days in a hospital. However, our mentor during the FDFPI Screenwriting workshop, Nestor U. Torre, suggested to make it 5 stories and he added two more interesting characters (an OB-Gyne who can’t have a child was one). He challenged me to finish the screenplay as my requirement for graduation and if possible, to enter it in the contest. I obliged and the rest was history.

Writing more than one story running parallel with each other is a challenge.

And once you have a common link between the different stories, you start to plot and position each event in some particular order to determine how you will tell the three or more stories as one whole.

Incidentally, I used the same method when I wrote The Vixens. The stories of six different women run parallel to each other and the common links are their high school reunion and some episodes of their lives.

I usually create a table where I would list the different plot points in the first column (the trigger, the turning points, the midpoint or the point of no return, the climax, the denouement, and the end). Each column after that would be the different characters or stories (story 1, story 2, etc.). And then I start to plot down the points where these should be. Once I’ve laid out the plan, I start writing scene by scene.

It looks easy at first, but when I came down to writing, it became harder. Somehow, the characters have lives of their own that move the story forward to where I didn’t plan it to be. I just have to trust my gut feel. The ultimate goal is to create a whole story ready for grilling, a secured skewer, in Filipino, tuhog.

How about you? Do you have stories that could be joined by one element like a theme, a place, or an event? Have you tried this technique before? If so, how did you do it?